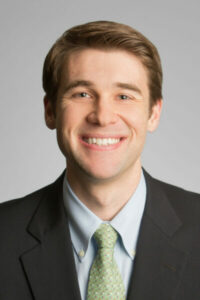 Ben joined Sawyer & Company, Incorporated as a Vice President in 2013. Prior to Sawyer & Company, he spent his entire career in various roles at Brown Brothers Harriman & Co. (BBH). Ben spent his last four years at BBH in the Corporate Banking group, where he helped provide loans and financial advice to public and private middle market-sized companies throughout the U.S. His work covered a variety of industries, with a focus on healthcare. To provide broad and comprehensive service to clients, Ben worked closely with other groups at BBH such as Wealth Management and M&A Advisory. Among other responsibilities, Ben analyzed the credit strength of the firm’s borrowers, managed the relationships with clients, and helped with business development efforts.

Prior to his role in Corporate Banking, Ben completed BBH’s four-month credit training program in the firm’s New York office. This program was followed by a year of ten-week rotations through the firm’s business lines, including Wealth Management. Ben started his career at BBH in the International Corporate Actions group, where he worked with the firm’s custody banking clients.

If you are interested in long-term investment management, we have the solutions that will help you feel secure in your financial future. Get in touch with us to start today.